The Inland 20 bilge boards are beasts.  They drop 3.5 feet below the hull and have a total height,  including horn, of about 5-foot-8.

Getting  them out of the slot is easy if you know this trick.

END_OF_DOCUMENT_TOKEN_TO_BE_REPLACED

Jack Sheehan completed conversion of his 1987 Johnson on Feb. 5 with the installation of an aluminum sprit, hood cover and bulkhead.  The boat will be named “Scooty Puff,” a nod to the animation cult classic Futurama.

Jack still has a wee bit of  rigging to accomplish, but the bulk of the conversion spanned just two weekends.  END_OF_DOCUMENT_TOKEN_TO_BE_REPLACED

A group order for carbon fiber masts will be placed with Forte Carbon Fiber Products  on Feb 15, 2017.   This is an unfinished mast without hardware or crane.  The cost without shipping is $1825.

Anyone wishing to participate in this group purchase must write a deposit check payable to Forte Carbon Fiber in the amount of $1000 and send it post marked on or before Feb. 15 to Stewart Harris, 1320 Constitution Ave NE, Washington DC 20002.

The balance $825 will be due when the mast is completed, before the masts ship. No  masts will ship until the balance is paid.  Forte has promised completion of the  masts no later than March 31, 2017. END_OF_DOCUMENT_TOKEN_TO_BE_REPLACED

Who has the best price on the hard-to-find Inland 20 insignia?  It’s a trick question because they are not for sale anywhere.  You have to make one yourself.  Thanks to Willie Crear for helping with the following: END_OF_DOCUMENT_TOKEN_TO_BE_REPLACED 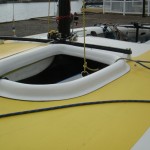 The Inland 20 class is seeing a number of innovations that have been standard gear on bigger scows for years.  The self-dousing spinnaker well appeared on two boats at the spring regatta at Indian Lake, Ohio.  Tempting though it may be, the chute eater requires heavy modification.  Gone is the splash rail.  In goes a long mesh bag alongside the bilge board.  A button on the belly of the spinnaker gets a pull cord.  And….there is that problem with sturgeon jumping into the hole.  Nevertheles, a five second douse is an advantage. Stay tuned.

Then we have the rudders.  Willie Crear is pushing his weed shedding design.  These are swept back a few degrees to avoid carrying weeds along.  Several folks at Indian Lake swear by Crear’s profile. Others are installing e-scow rudders, which are not as deep but still have an elliptical profile. 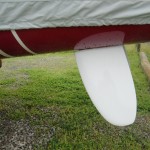 Either way, the deeper profile greatly improves downwind helm, which can be lost when using the vintage license plates on most Potomac boats. But the deeper draft may be difficult in the sandy shoals of our river.