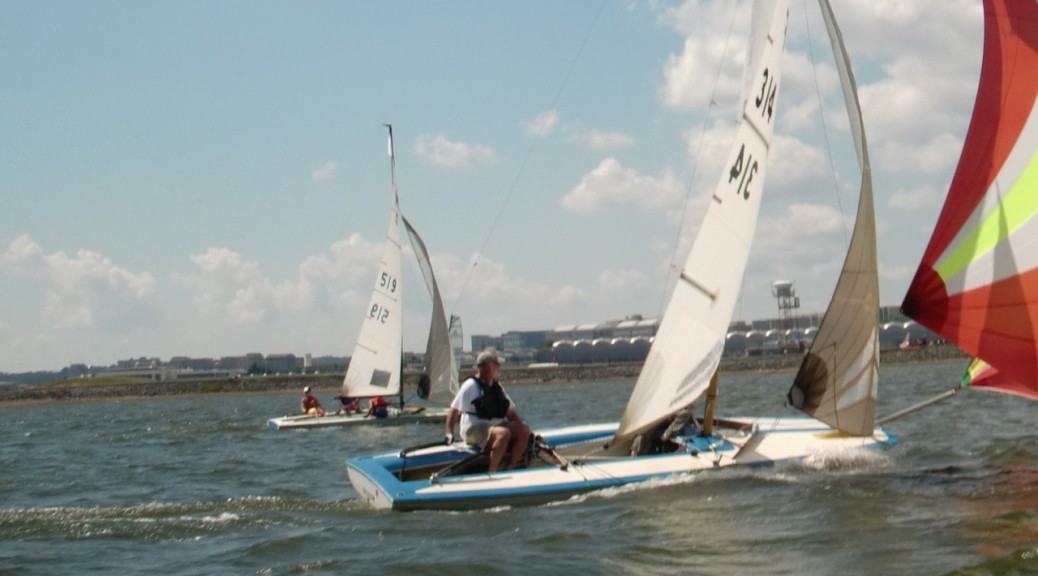 The I20 fleet launched four scows Sept 6, including the newcomer “Barnstormer,” a beautiful 1974 Melges converted by Scowsailing.com.  Also competing was a  TC Williams high school team driving the 1977 Melges known as Avocado.

South winds built from a morning of 10 mph to an afternoon of 15.

The fleet ran four races.  To keep things safe, spinnakers were tucked below deck for the last two races, when winds peaked at a solid  15 mph.

Race 4 was won by High Schooler Mac Dickson and his teammates Mohammed and Ford.  Barnstormer driven by Carl Schaefer scored a second in the first race.  UffDah! took three firsts largely due to clean hoists and douses by crew.  Good starts helped a bit.

A  heartbreaker occurred in race number one when Tim Dickson’s OSP collided with a catamaran, ripping the scow’s nose open.  That boat is off for repairs and Tim is vowing to be back for the fall series.  In race 4, we saw a capsize of Barnstormer.

A beautiful day. Below are video captures of the GPS data from the Speedpucks aboard Tim’s OSP and Stew’s 806.

Check this out...amazingly close race right to the end!
LeukemiaRace1

This was a great day on the water. Carrie and Jason were in the forward cockpit trading duties on the boards and sheets.  It was a first I20 race for both. Our loyal opposition,  Tim and Braden, showed in the hotrod OSP and schooled us with lots of leebow mumbo jumbo in the start gate every… single… race!