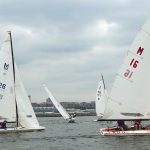 Surviving the day could also be considered a  bonus for some rookies.

The Stas Burgeil Team had not raced together previously on its recently converted 1983 Johnson Boat Works (626).  “Kids had fun but it makes for a long day!” Stas emailed later.

Other teams included Trip Hook and John Chacko about  Alrighty Then! (806), Chris Stinson and  Heather aboard Youbetcha Buddy (642), Casey Firth and Tim Dickson aboard the 1996 OSP (FD0).

But the greenest crew was Ed Ryan and his crew Pete, aboard the M16 Chalupa. Neither  had raced a PRSA event going into the day, but both agreed it was “A Blast”.

For more about the race, see this nice writeup from vice commodore Aaron Boesenecker: http://potomacriversailing.org/2018/05/07/prsa-rookie-regatta-results/