As the saying goes, an expert is anyone from more than 50 miles away.   But this time it was a real expert.

Andy Allen of Lake Wawasee Indiana  joined the Fleet of the Potomac for a tune up session April 3.  With races beginning that Sunday, Andy’s rigging expertise was well timed.

He helped Mark Burrows tension his newly acquired 1984, Johnson.  Stas Burgeil set up his 1983 Johnson with Andy supervising.  And, the mast was raised on Will Fenn’s 1985 Johnson.

Allen is an avid DN sailor and enjoyed chewing the fat with former Iowan Tim Dickson.

“Seems like you got a real dedicated bunch of guys,” Allen commented later that night.

That’s high praise from Allen, who has been instrumental in the  growth of the I20 fleet on Lake Wawasee.  Andy also scored third at Nationals in 2018, finishing just one point behind Joe Ewing. 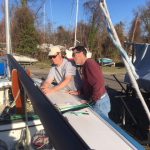 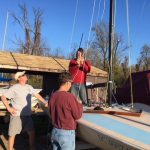 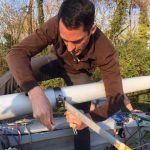 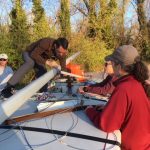