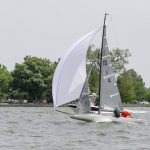 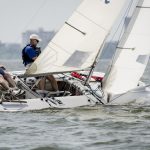 “We went over yesterday as I tried to stay ‘heated up’ to catch (Stew)! You were off downwind further, (where I should have gone to de-power…) Not thinking the puff would be that bad, I took the Spinnaker sheet & asked Tom to trim the luffing jib. Unfortunately the combo created bad lee helm in the puff, & I did not possess enough hands/arms/time left to ease the main as it heated up waaaay too much, lol! Wrong split second decision making…!”

Ewing, who won the Cherry Blossom in 2016, praised the Potomac fleet for showing more speed around the course.

“They are faster than last year, showing better boat speed and handling,” Ewing said. ” It takes time and effort to get up to speed and you have to be willing to take some lumps to learn what the faster boats are doing different than you.”

Despite lopsided results, the local skippers seemed to appreciate all the information that was shared by the victors, as well as the opportunity to get better in the strings.  Some crew were racing for the first time.

“Jack-thanks very much for letting me crew on Sunday.  It was a great intro to sailing the I-20, and we didn’t capsize- a measure of success.  Really appreciate the opportunity,” is how  the Potomac’s Ed Ryan thanked his skipper, Jack Sheehan.

Rick Loheed’s crew, Tom Harrop, drove down from Rhode Island for the race. Tom has one of the older M20s in existence, Hull 32, but he needs parts for the boat. The Potomac’s Stew Harris had a pair of old style license plate rudders to contribute to Tom’s project.  Harrop got some special attention before the race from Joe Ewing.

“Joe Ewing was very gracious in showing me responsibilities of a scow  “crew” and creatively simulating wind conditions to allow spinnaker practice  with a boat on its trailer in the parking lot,” said Harrop.

“Thank you also for pairing me with Rick (Loheed). Despite the thrill of the chase while racing, he provided a tremendous amount of information. Although disappointing to have equipment issues and a capsize hinder our participation on Sunday, it was an invaluable lesson for me to go through the process of righting the vessel,” he continued.

Loheed was sailing the 1985 Johnson known as Firewater, one of two new conversions to hit the Potomac this year.   At one point, a shroud pin popped off, but they managed to jam a Leatherman into the Stamaster to keep the rig up.

“Our racing could have been better, but hilarious comedic calamity intervened… Tom was great, a very nice guy & we are both lucky he was a MacGuyver type,” said Loheed.

Top Potomac Sailor Jack Sheehan was racing his converted 1987 M20 Johnson for only the second time.  The story of this conversion, which Jack dubbed “Scooty Puff,” illustrates  the community spirit that has helped build the Potomac Fleet.

The boat was first spotted for sale four  years ago at the Windy Crest Yacht  Club in Oklahoma.  The owner was not ready to sell to an out-of-towner.  It changed hands several times, but never really raced.  Sheehan was lucky enough to have his lowball bid of $500 accepted last fall.  It was a transportation relay to get the boat to Washington DC, starting with Jeff Patten of Indian Lake, who towed the boat and shaky trailer to Ohio on his way home from  business in Texas. The final leg to Washington was an overnight trip by Jack Sheehan. A nice Quantum jib was a donated by Brook Patten of Indian Lake. The boat was fitted with a sprit and hood cover by the conversion team at Scowsailing.com.  And, the bright red A-spin was a purchase from Willie Crear of Minnesota, another I-20 sailor who has been helping the Potomac fleet.

“This vintage fleet has been growing because  this incredible boat  attracts a lot of attention…and  holds it!”  said Stew Harris, who brought the first I20 to the Potomac. “But another big reason is the generosity of successful I20 sailors who keep sharing parts and knowledge. This weekend race is a direct result of their kindness.”

Special thanks go to Carl Schaefer, who originated the regatta last year and shot photos of the race this year.  Virginia Bush and Trip Hook put together refreshments for the picnic on Saturday. Jack Sheehan was kind enough to score the event.  And, a very special thanks to Lightning Fleet 50 which manned race committee, led by Aaron Bossenecker.