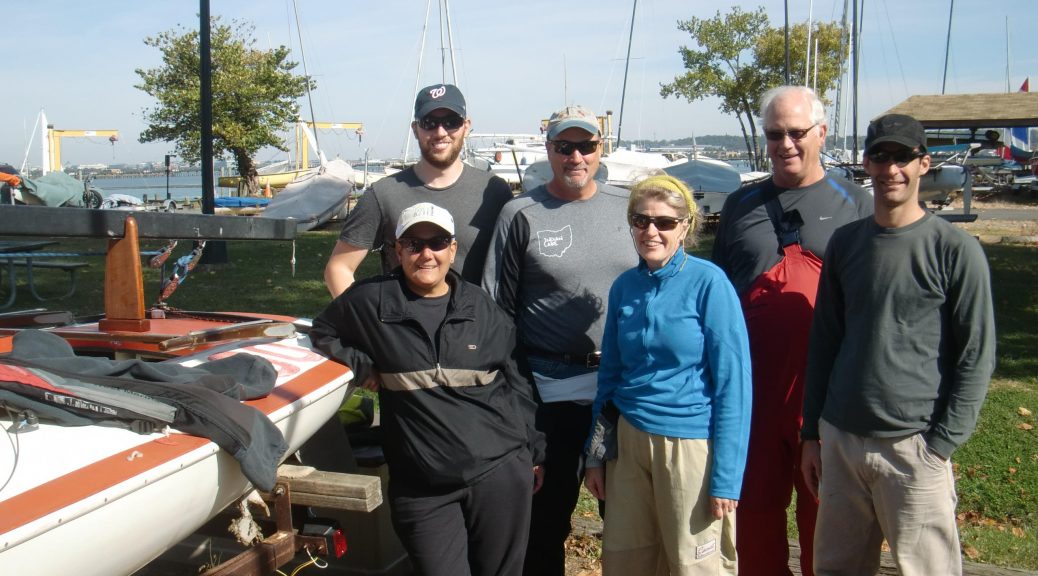 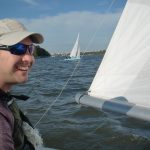 Ohio scow experts Jeff Patten and Joe Ewing crewed for Potomac  sailors Jack Sheehan, Carl Schaefer, Will Fenn, Trip Hook and others,  as a way to transfer some knowhow.

Potomac sailors wrote down their impressions afterward and we share this now as a way to help everyone appreciate what these generous sailors imparted during their weekend in our fair city.

Jeff and Joe…thank you sooo much for your long drive and gracious coaching!

To get this thread going, here are a few of my take-aways:

1. I’m a chronic footer. Jeff showed me where I should be relative to the wind. Basically, take her to the wind until the jib starts a real curl a couple feet up along the jib. Play that area in a steady wind without over-steering. Shouldn’t have to move the tiller more than about 2-3″ but doing a constant feather and walk testing how far the boat will go to windward. You can really feel it when you are too close and momentum drops.

2. Constantly play the main in and out when pointing to play the edge of the wind. In a steady wind, there should be constant soft movement in and out managing each puff.

3. Focus on sails, not on boards. Jeff said to focus on sails keeping them properly trimmed and adjusted and worry about boards secondary.
4. Aspin rat tail at about 6” no more. I had mine way too long. flying the apsin with Jeff, I could see a huge difference – better control.
5. Aspin. flying: keep the boom in much closer than expected. Jeff mentioned this is something he learned just recently at Nationals after looking at some of the faster guys. Their booms were in much tighter than expected – don’t be shy about cranking and sailing the angle. Dead downwind is slow.
6. Color coding lines by category makes life easier. Simple idea but applied systematically, it can really help. Example, sheets blue, halyard lines in green, control lines in red. I’ve tried color coding but not in thematic categories.
7. Weight balancing. Depends on weight of people on board. Jeff was moving much farther back to get our nose out  and improve speed. Balance weight to keep that nose out of the water for speed.
Okay, I’ve done my sharing. Now I want to hear what everyone else learned!
Will
Stew Harris:
I got the following from Jeff Patten after his visit…”When your group is getting in the racing mode, remind everyone of this. I saw a lot of lines that were too long, adding weight and possibilities of entanglement. Don’t cut to a minimum but comfortable usage. I always put a knot about 9″ from the end so if the line gets pulled to the pulley you have something to grab to get it back in.   Too many extra lines, mooring, etc,  on the floor to step on, add weight when wet, get tangled, step on and loose footing etc. Bungee cords sometimes do need replacing or retightening when stretched after a year or so of usage.  A retrieving clothes line for the spin halyard is almost a must. Get at least the 40 footer and zip tie it to the rudder post, once the skipper uncleates the spin, it has enough resistance usually to help the crew bring down the chute with no help from the skipper.
I told Joe on the way home we need to measure spin lines, main sheet, jib sheet spin halyard etc so when one needs to be replaced we don’t panic and go to excess, helping to keep cost in line as well. ”
Joe and Jeff also helped me tension Firewater and Youbetcha with 200lbs on the side stays.  I’ve been trying to point with center boarders for years, and on the following Sunday races we lost nothing to them.  The scow also felt more stable on its ear.  I was sailing on a rail.  Joe and Jeff explained that at higher tension, the rig could not be knocked  around by chop or puffs.  The mast responded much quicker to movement of live ballast.  I’ll be honest…high tension on a 35 year old boat makes me a bit nervous.  But Joe and Jeff reminded me that it is also true that repeated dynamic loading of a mast that shifts around under light tension will fatigue the swages on the shrouds. Back on the trailer…  To avoid damaging the hull…they unload the forestay on a fixed stay boat.  On a boat that uses jib luff wires to load the mast, just take down the jib.
Joe crewed for me both races Sunday and got after me for doing too much futzing around after tacking and before I got the boat on its lines.  Retrieve the board later, he recommended…get that heading first.  Downwind, I can still Joe chanting: “stay in the power, stay in the power” as I scalloped to go deeper.  My dips closer to downwind need to  be shorter.  He liked Youbethca a bunch but wanted to see separate spinnaker sheets (not continuous through cockpit) longer lines, shorter rat tail and ratchet blocks to help the crew in a blow.  He also recommended the take up mechanism for the spinnaker halyard to reduce spaghetti pile ups in the skippers cockpit.
I think Joe went easy on me in part because he says his dad used to mutter  “Youbetcha Buddy” in traffic, usually before muttering something stronger under his breathe.  🙂
Trip Hook:
I got a few of the same pointers as Will and Stew – shorter rat tail on the a-spin, tighter rig, focus more on sails than on boards (we heard this from Willie as well), better line management, and keeping the main sheeted in further than you might expect with the spinnaker flying. To this last point, he basically reminded me that the spinnaker is considerably larger than the main and that the priority is making sure it is properly filled.
Joe and I also did a lot of work on jibing. We practiced turning the boat sharply to initiate the jibe, then pausing momentarily to let the a-spin jibe and fill before continuing to turn. We also discussed maintaining leeward heel going downwind, and constantly exploring the leeward edge of ‘the power’ by getting the boat heeling and falling off slightly until you can just feel the boat begin to depower. In general he encouraged me to make slight adjustments to steering in order to optimize boatspeed, something I was better at before racing a Laser with its big rudder.
I also got a lesson in sheeting in too quickly coming out of a tack. Joe told me to watch the streamers on the leech and make sure they are always flowing back, which usually means easing the main a little bit until the boat accelerates and you can point higher.  This goes for the jib as well. He also emphasized that over-tacking initially is less detrimental than not tacking enough and stalling out.
Always great sailing with those guys, thanks Stew for arranging again!
Trip